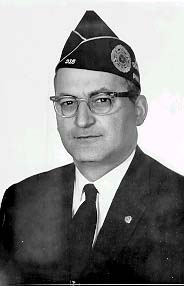 Upon induction, Mort was sent to Atlantic City for basic training. Hearing his father was a police captain and his uncle a Detective Lieutenant, he was immediately assigned to G-1 (Intelligence). In March, 1943 he was sent with a cadre to open a BTC in Greensboro, NC and there assigned to the Provost Marshal's office. He rose in rank from Pvt. to S/Sgt. His primary job was tracking AWOL's. In August, 1945 the BTC was changed to an ORD, and all personnel were replaced by returning soldiers and given overseas orders. He was in Fresno, California awaiting orders when the Red Cross brought him home to be with his wife after the loss of a full-term baby. He was assigned to Mitchell Field, NY until his discharge in February, 1946, having served honorably, where needed, for 3 1/2 years.