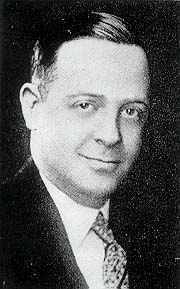 Julius Berg - PNC Berg served with Company I, 308th Infantry, 77th Division during World War I. He was severly wounded on the front line in Arras, France. He was honorably discharged in 1920 as a Sergeant. PNC Berg served as a board member of several veterans' organizations including the American Legion and Veterans of Foreign Wars. A lawyer by profession, Berg was very active in politics, serving as a New York State Assemblyman and a State Senator.