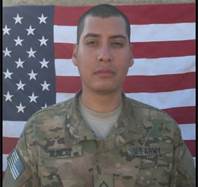 Born on September 10, 1986, was killed while on duty in the Kunar Province of Afghanistan, on Wednesday, June 22, 2011. Hoping to one day become a dentist, Levi joined the U.S. Army on September 23, 2009, and was deployed to Afghanistan from Schofield Barracks, Hawaii in April of 2011. He was a good friend to many, a great brother, and a wonderful son to his still living parents, Raul and Bertha Nuncio. Levi is survived by his brothers Benjamin, Dan, David, Ismael and a sister, Elisama.