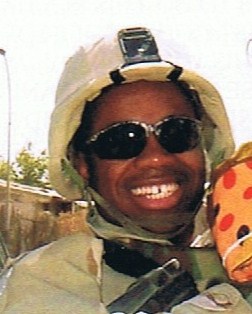 Army Spc. Benyahmin Ben Yahudah, 24, a combat field medic, died when a suicide bomber drove into his patrol. Ben Yahudah had been handing out candy and toys to the children in a Baghdad neighborhood when the bomber struck, killing the medic and close to 20 Iraqi children. The Army honored him posthumously with the Purple Heart and the Bronze Star. A native of Atlanta, Ben Yahudah grew up in that city's community of Hebrew Israelites, an African-American Group that claims to be one of the lost tribes of Israel. His uncle, Elakhaz Hacohane, a priest with the Hebrew Israelite community in Israel, sad Ben Yahudah had often visited that community, which is based mostly in the Negev town of Dimona. Ben Yahudah's parents home-schooled him and his siblings because of their religion, and he apparently excelled, earning his high-school equivalency diploma at 15. He later attended Athens Technical College, where he studied marketing management and electronics, and joined the Army in 2003. One soldier who served in Iraq with Ben Yahudah praised him stating, "Benyahmin was what every medic and every soldier wants to be. He lived his life in a terrific was and he is directly responsible for saving the lives of many of his fellow soldiers."